We invited some students from Solent University, University of Portsmouth and University of Winchester to watch Acosta Danza with us as ambassadors for the show. Here are some of their thoughts...

Last night I was invited to watch Acosta Danza’s new touring show, Evolution, which is playing at the Mayflower Theatre, Southampton for just two nights, 3rd and 4th March 2020. As a performer with little dance background or knowledge, I must admit I was sceptical of the idea, however every part of the production had me blown away – from lighting, to music and of course the incredible choreography and dancing! 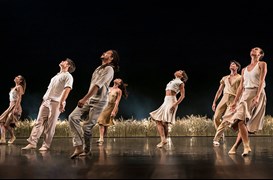 The first dance, ‘Paysage, Soudain, la nuit’, introduced Cuban culture with traditional music and the storytelling of this piece was  clear, portraying the lives of workers, as well as creating a complex romance. This opening dance was simplistic in terms of design, such as plain, sand-coloured costume and a practically bare set. As an audience we were therefore fixated on the Cuban Rumba genre of dance, including a mixture of solos and duets, as well as group sections of the dance, which seemed entirely effortless and free flowing. When the music changed slightly, we were reminded of the vibrant Cuban night life, where a bright lighting change was accompanied by a more contemporary style of dance. In addition, the use of canons and repeated motifs, as well as consistent call and response sections dispersed throughout the piece here were thoroughly satisfying to watch. Cleverly, choreographer Pontus Lidberg used a combination of lyrical movement and physical theatre at the climax of this piece to express the narrative. In my eyes, by communicating a love affair between characters in such a physical and connected duet, this concluded the initial dance as an emotional and moving one. 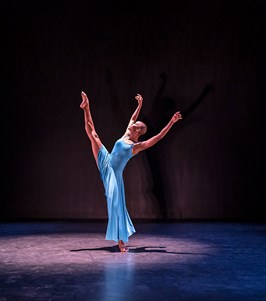 ‘Impronta’, the second dance of Acosta Danza’s production was entirely the reverse of its predecessor and the audience was instantly and without hesitation engrossed by the solo dancer, wearing a dazzling blue dress, who ‘stood’ centre stage in a single spotlight. When I say ‘stood’, it must be said, that the way the beautiful dancer had positioned her body, bent over with her hands and head appearing underneath her legs, seems virtually impossible to myself and thus I was utterly astonished by her flexibility and incredibly acrobatic movements. Lighting and music used in ‘Impronta’, was significant in the storytelling of this piece, creating chaos and the feeling of a struggle, which echoed the dancer’s animalistic and athletic style. However, by the end I felt a sense of calm, while a single spotlight created a beautiful silhouette of the dancer’s perfect frame on the back curtain, which was honestly spine tingling and left me with chills. 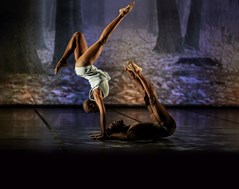 Just before the interval, we were drawn into another fascinating and poignant dance piece, ‘Faun’, which told the story of a budding romance and seemed to show the ever-fluctuating emotions of an intimate relationship. With the background and clever use of textured gobos in lighting, it was clear we had been transformed to a forest setting, which was confirmed by the animalistic and sharp movements of the pair of dancers, who both moved so easily about the stage. There was absolutely no doubt of the chemistry between the dancers, due to their intense eye contact and again physical theatre was used to show both the love and tension between the lovers, which had the most extraordinarily hypnotic effect on me.  I found this dance intriguing, as I must say I wasn’t totally sure of the plot throughout its   entirety, however the ambiguity and creativity was mesmerising and utterly thought-provoking. 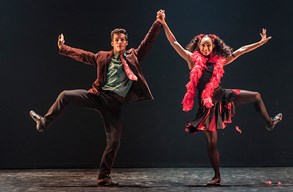 The evening rounded off with a burst of colour and the guest appearance of the man himself – Carlos Acosta, whose presence was immediately felt throughout the auditorium, as he was greeted with an enormous cheer. This final dance, ‘Rooster’ gave a completely different feel and created a new and much more cheerful atmosphere, through the bright coloured costumes and lighting design. Most significant I think in creating this vibe was the use of the music of ultimate rock band, The Rolling Stones, which included hits such as ‘Lady Jane’, ‘Paint It Black’ and ‘Ruby Tuesday’. This also helped portray the time period, 1960s and 70s, of the dance’s plot being told through a mixture of contemporary, jazz and ballet genres, as well as a significant and hilarious jive section. I would say that ‘Rooster’ was my favourite of the four dance pieces, as it was so surprising, upbeat and unexpectedly funny! I especially enjoyed the jive section, where a couple jokingly battled against each other to gain dominance and we saw an insight into their potentially new and blossoming relationship, where, I think, the boy was trying to win his girl over. ‘Rooster’ included so many different sections, that it’s hard to put into words and capture the incredible lifts, interesting shapes and varying storylines. However, it is safe to say that Acosta stole the show in the finale and thoroughly deserved the rousing applause he received, because as an audience we saw such a characterful performance, which both showed off his astounding dancing ability but also his playful and humorous self.

Overall, if anyone asked, I would without doubt highly recommend, Evolution. I have been genuinely shocked, as although I’m not a huge fan of dance myself and wouldn’t necessarily choose to go to a dance show, this has completely changed my outlook. As with the rest of the audience, I was absolutely mesmerised from start to finish and this was evident from the silence in the room throughout – you could have heard a pin drop! I would certainly suggest that if you can manage to nab a ticket it would be totally worth it and if like me you fancy a new experience at the theatre, this is the perfect first dance production for you!