When the curtain rises on Welsh National Opera’s production of La forza del destino this spring, audiences will receive their first glimpse of an exciting new concept in theatre design – the Verdi Machine.

The brainchild of WNO Artistic Director David Pountney and German designer Raimund Bauer, the Verdi Machine is a multi-faceted scene set which can be radically re-imagined for different productions.

And so it’s the perfect accompaniment to WNO’s ambitious Verdi trilogy which sees the company working with German opera house Oper der Stadt Bonn to co-produce new productions of La forza del Destino this spring, Un ballo in maschera in 2019 and Les Vêpres siciliennes in 2020.

For David, the Verdi trilogy offers the company not just the opportunity to stage three of the Italian composer’s most compelling works but also the chance to produce them in a range of different spaces thanks to the new sets. 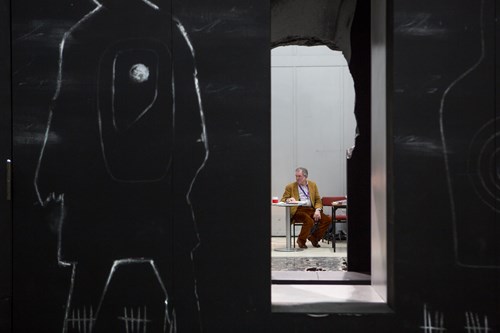 “Performing Verdi, and performing Verdi pieces with very large choruses, is very strongly rooted in the tradition of WNO,” he says.

“Over the last few years we’ve done Verdi’s middle three, the very popular pieces of La traviata, Rigoletto and Il trovatore, as well as the later work Don Carlos so I thought it would be interesting to look at a group of his late middle pieces. These are where Verdi is experimenting - they are transitioning between those relatively simple pieces Traviata, Rigoletto and Trovatore to pieces which are much more complex and ambitious in terms of their content.

“When you think of Forza for example, it’s a very complex piece to pull off. The structure of the piece is like War and Peace or Dr Zhivago or one of those epic novels where there’s an individual life going on with a love affair or something similar and these characters are torn apart then smashed together again by vast trans-continental disturbances like war or revolution.

“Forza is very much like that. It straddles several different countries and people meet by accident in the most improbable way but that’s part of that genre of people’s experiences in war or destabilised social circumstances.”

To reflect the monumental scope of Forza, Ballo and Vêpres, David wanted a new kind of staging which would be a part of the work, facilitating its story-telling.

“I thought that, just as one thinks of a Shakespeare stage, it would be possible to create an environment which could be adapted to these three pieces,” says David. “This is partly because Verdi is interested in bold, epic, dramatic strokes rather than naturalism and so a similarly bold, epic, abstract structure would be the right kind of framework for these operas.”

David turned to Raimund, who designed productions of William Tell and Moses in Egypt for WNO in autumn 2014. 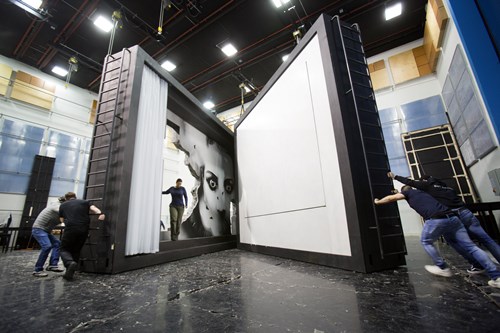 “Raimund came up with structural ideas of how to create spaces through the Verdi Machine,” says David. “These Verdi pieces are very much about inhabiting different spaces and so the manipulation of space is very important. And it was also very important that the sets are used differently across the three operas so each has its own identity.”

Raimund was quick to rise to the challenge of David’s idea.

“The first time I talked to David, about three years ago, we tried to figure out what connects the three Verdi pieces and then how we could connect them through a set. It was very clear right from the beginning that we didn’t want a stable set, we wanted a morphing system – and that is when we invented the Verdi Machine,” recalls Raimund.

“We decided we needed a Verdi Machine at the very first meeting but at that point I hadn’t decided how it would work, just that it needed to be some kind of machinery.

“It should work like a machine because this set is not just decoration – it has a role to play in showing the inner situation and it should support the stories. These pieces are about war, passion, church, destruction – all these powerful moments.”

The resulting Verdi Machine is made up of three interlocking panels which can be turned, lowered and re-shaped so that it drives the production rather than simply being a backdrop.

“They are three huge frames and in one opera they are connected, then in the next they are not connected and then there are single walls which can be connected.”

As well as linking the trilogy, the set also needs to ensure each work is distinctive. 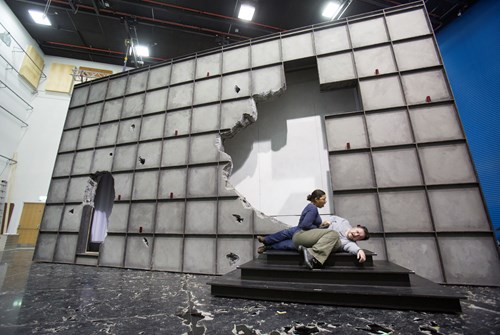 “So it will look like three different operas – the audience shouldn’t feel it’s the same set. But when you have seen all three operas you should feel there’s the same way to tell the story.”

The sets for all three operas were designed at the same time to make sure the Verdi Machine worked throughout the trilogy. Created in Bonn, it was shipped to Cardiff before Christmas where it was assembled with the help of two of the German team.

But Raimund says the biggest challenge was not distance between the companies but the fact the Verdi Machine needs to fit into so many theatres of different sizes and dimensions.

“It is difficult to design a space which then needs to fit all these different spaces. It was a real challenge doing this set, not just because we were doing three operas in one set but also because for WNO’s tour it needs to work in seven different theatres.

“Each of the operas has a lot of very large chorus so there is a lot to manage. There is never an empty space on the stage, the space is always defined by the Verdi Machine. There is always direction and a dynamic structure, so the machine is moving all the time. David is very brilliant in using a set and creating a dynamic situation.”

Leading the workshop team at Oper der Stadt Bonn was head of workshops and production Jan Schulze, who says creating the Verdi Machine took much longer than a usual set.

“The work on these productions started quite early and Raimund presented his model in autumn 2016 in Bonn. The reason for this was because we had to prepare three operas at the same time as working on our own productions.

“Usually we build our productions in Bonn in one row and a set for an opera takes normally two months. In the case of the Verdi Machine we started our work in April and finished in the end of November because it was quite a lot of work and we had some interruptions because of our other projects.”

Creating sets across the countries did also present the team with potential complications.

“The work on co-productions is quite different to our regular productions because the set has to be absolutely finished before shipping,” explains Jan. “Our opera house is only a few miles from our workshop so if something doesn´t work properly it´s not a big deal to go there and change it - but Cardiff is a bit further away!

“Thanks to Raimund, everything was well prepared and we were in close contact over the building period. At the beginning of November we had the final building inspection in Bonn with Raimund and the colleagues from Cardiff. After that we had to do some final corrections and finally the set was shipped to Cardiff at the beginning of December.

“The Verdi Machine posed real challenges for us. The big moveable frames with their different fixtures look quite easy but, in fact, they are magic boxes that have to look good from every side. They have all been quite complex.

“But, despite the challenges, I like working on co-productions because it leads us all to think a bit outside the box.”

La forza del destino is performed as part of WNO’s Rabble Rousers season which also features Puccini’s Tosca and Mozart’s Don Giovanni. The productions will be performed at The Mayflower Theatre, Southampton between 21-24 March. More information is available at wno.org.uk