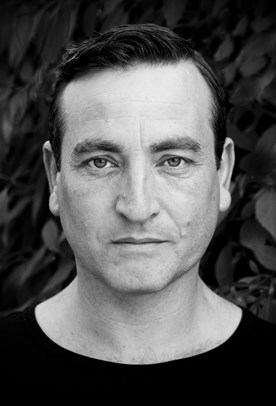 National Theatre's Macbeth is now touring the country. A few months ago our press officer Charlotte took a trip to London to see how the rehearsals were getting on, and managed to chat to Michael Nardone who plays Macbeth about his previous experiences with shakespeare and the National Theatre production.

Tell us how you became involved in the production of Macbeth?

They asked, the director asked and I said yes. Rufus and I go way back, I worked for Rufus Norris back in 2003 on a big production at the Young Vic, Peribanez was the name and it’s a play from the Spanish golden age. It is very similar to Macbeth in the sense that it is a big cast, big set, very expansive and wide! He got in touch and asked if I was interested and I said yes.

What is your first memory of Shakespeare and his works?

My first memory was at high school, in an English Literature class, my teacher called Mr Fenwick, a very flamboyant erudite English teacher who read with us The Merchant of Venice. So that was my very first experience of Shakespeare’s works. I had heard the name in my youth but that was the first time I had ever seen any of his words.

What is your favourite part of the play?

I think my favourite part of the play, is the most tragic part, where he has to sit with Lady Macbeth as she has now died and it’s the whole sequence. It is a very philosophical part of the play as he is talking about all life, how completely fickle and how fragile life is. He realises that he had been duped, he had been had by the fates. He had nothing to live for. That sequence is the best moment, and some of the most famous dialogue in all of Shakespeare. I mean there are so many good moments, we could be here all day, but these moments are heart-breaking and beautiful.

Did you see the London production and if you did, did it influence you the way you played the character?

I did see it and the answer is no. I think it’s the road to ruin if you don’t come into the room with an open mind, you are going to inform yourself by how other people in the room are behaving and what they are bringing to the table. It is an extremely collaborative process and you discover it together, I have a very particular idea of what is going on in the guys head but it is not a selfish process. There is a real process of elimination when rehearsing a play, the choices have to be the ones that are the most impactful for our production. All of that comes from rehearsals.

Why do you think it is important for young people to read or watch Shakespeare?

I think it is important for a younger generation to watch and read anything, however I do think that as an eye into literature there is no finer way to do it as it is probably one of the most difficult ways into literature. That is purely because of the language. His command of the English language is very superior to anyone else. He even coined words that you hear every day now. It gets a bit easier after your read Shakespeare. All the themes are relevant today and it cannot fail to grab you. It is going to affect them for sure.