I visited the new UK Tour of Miss Saigon which was in its final week at Birmingham Hippodrome. This revitalised show is Cameron Mackintosh’s acclaimed new production of Boublil and Schönberg’s legendary musical which ran in the West End recently, was updated for Broadway and then began its UK Tour in June. 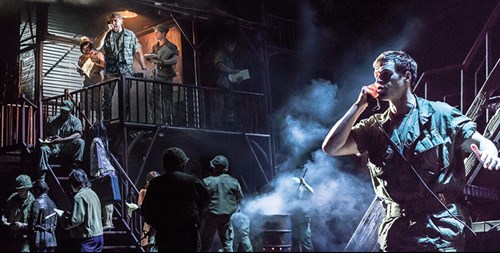 As I pop backstage to catch up with Miss Saigon’s Company Manager Neil White, most of the cast are on their way out of the building smiling chatting and on the lookout for food, they had just performed an understudy run of the show, a great chance to rehearse in all of the lead cast understudies, take notes and for some of the lead cast to actually watch the performance from out front.

Neil, who has visited Mayflower Theatre for many years being company manager for Mary Poppins, Shrek, Oliver! and Starlight Express to name but a few is beaming as he talks about this gargantuan show. “It takes 16 articulated lorries to move the show from venue to venue, it was our first move from Leicester to Birmingham in July which was challenging. Alter the show has moved, it takes the crew four 24 hour days working shifts to put the production together ready for opening night. We have a massive company of 92 of which an acting company of 38 with 10 different nationalities in the cast”. 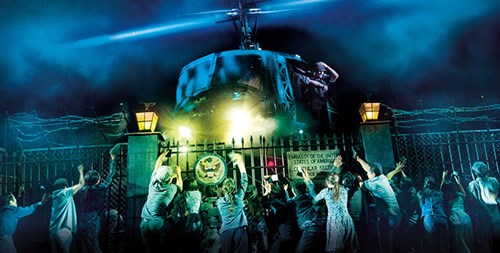 He added, “This production is not really a touring show – it ‘sits down’ in each venue as per any long running show in the West End. There is an immersive feel to the set as it protrudes through the proscenium arch into the auditorium to help bring the audience into 1970s Vietnam. There is also a massive amount of authenticity in the show, during rehearsals the company researched documentaries about the conflict including Hearts and Minds which is from the Vietnamese point of view. Our flak jackets and helmets have been worn in action and many were imported from Vietnam and Thailand. The big set piece in the show is the Huey helicopter which appears in a flashback sequence in Act 2. This helicopter is 3.5 tonnes and is only slightly smaller than the real thing”. Neil should know as he took two of the cast to a photocall at a local airport with a real Huey they week beforehand. “It was amazing seeing the real helicopter, which had actually served in Vietnam. The sound of the helicopter as it took off and flew overhead was immense – just as good as the sound you hear in the show itself”.

For those new to Miss Saigon, the story is set in the last days of the Vietnam War where 17 year-old Kim is forced to work in a Saigon bar run by a notorious character known as the Engineer. There she meets and falls in love with an American GI named Chris but they are torn apart by the fall of Saigon. For 3 years Kim goes on an epic journey of survival to find her way back to Chris, who has no idea he's fathered a son. 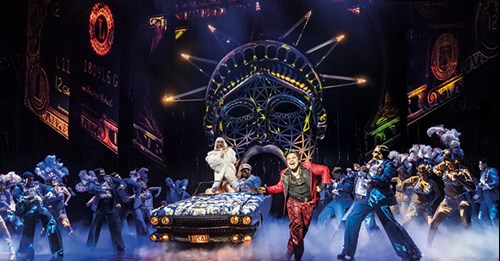 Having not seen the show since the original production over 20 years ago, I forgot how many brilliant tunes were packed into the first half hour of the show, The Heat is On in Saigon, The Movie in My Mind, Why, God, Why?, Sun and Moon and Last Night of the World. This new staging is sensational and it looks every bit the Cameron Mackintosh production – brilliant sets atmospheric lighting and a company who are thoroughly enjoying themselves deliver night after night. Red Concepcion who plays The Engineer is so loveable, you can’t help backing him even when his character is truly nasty in the show. I saw Joreen Bautista playing Kim who is making her professional debut in the show at just seventeen – and wow what a performance in someone so young. The performances by the whole company drive an emotionally charged story that by the end left me slightly moist of the eyes.

I also caught up with Ashley Gilmour who plays Chris. Look out for our interview with Ashley soon.