Quick Fire Round: Five to Five

THE BAND is a new musical about what it’s like to grow up with a boyband. For five 16 year-old friends in 1992, ‘the band’ is everything. 25 years on, we are reunited with the group of friends, now 40-something women, as they try once more to fulfil their dream of meeting their heroes. Featuring the music of Take That, Britain’s most successful boyband of all time, whose songs include Never Forget, Back For Good, A Million Love Songs, Greatest Day, The Flood & Rule the World. The Band will be played by AJ Bentley, Nick Carsberg, Yazdan Qafouri Isfahani, Curtis T Johns and Sario Watanabe-Soloman, who, as Five To Five, won BBC’s Let It Shine. 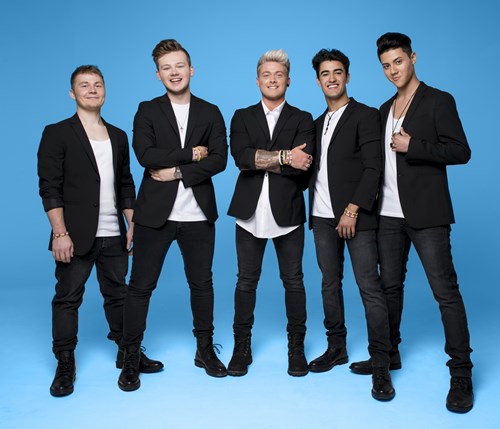 Who are your musical heroes?

S: Take That. I also had a soft spot for Jedward!

A: Take That, Robbie Williams, Olly Murs and Michael Jackson

What was the first album you ever bought?

N: McFly – All The Greatest Hits

We are going out for dinner – what do you choose?

What is the most attractive quality in a partner?

N: Being able to make me laugh

A: Nice teeth, humour and a good connection

Tell us something about yourself that would surprise us

C: I love caving. I used to go all the time

N: When I was younger I was the most emotional person, but when we all watched La La Land recently Yaz sobbed for 45 minutes while I went to the toilet to waste time!

Y: I used to be a massive computer game addict – I used to skip sleep and play Call of Duty. It affected my studies so I went cold turkey on playing video games:

S: I know all the world flags. The others test me on them

What’s the naughtiest thing you have ever done?

C: I once did a prank on my friend that involved persuading the head teacher of our school to make my friend believe that he had been expelled

N: I sold sweets at school and saved enough money to buy a car. I did it for two years without getting caught

Y: Getting a tattoo. My parents weren’t keen, but I got this meaningful one of Roman numerals of the numbers 5 2 5 [Five to Five]

A: On holiday in Turkey with my parents when I was 14 I got my hands on some ouzo. I was very poorly and my parents were very unhappy with me