Towering yellow wigs and multicoloured beauty marks may not be the usual fare for a make-up artist but they’re all in a day’s work for Siân McCabe.

Head of Wigs and Make-up at Welsh National Opera, Siân and her team are currently working on these fantastic creations for La Cenerentola – Gioachino Rossini’s operatic retelling of the Cinderella fairy tale following three sisters: Tisbe, Clorinda and Angelina (the Cinderella character).

Today we’re backstage being given a demonstration of the make-up and wig for Tisbe, one of Angelina’s vain step-sisters. It’s team member Bethan Jones, Wig and Make-up Assistant, who is in the chair undergoing the dramatic makeover at the hands of Siân but when during the production it will be opera singers Aoife Miskelly and Heather Lowe who are transformed into the ‘ugly sisters’ duo Clorinda and Tisbe.

Staged in the autumn season alongside Prokofiev’s War and Peace and Verdi’s La traviata, this production of La Cenerentola is a revival. First staged by Houston Grand Opera, WNO then premiered it in the UK at Wales Millennium Centre in Cardiff in 2007. Using staging, costumes and wigs from the original production, the team have spent the last few weeks recreating the production for another UK tour.

“It originated in Houston and it’s been done in several different places since then,” says Siân. “The wigs come with the show which is quite unusual as we usually source the wigs ourselves.

“But because it’s so specialised these wigs are absolutely specific to the show. Normally you have stock wigs which you can style differently for different productions but these can only be used for this La Cenerentola because of the styles and bright colours. They are part of the show so come ready to use. It’s like having flatpack furniture - we have to tidy them up a bit but they are ready to go.”

The wigs are very colourful with the men in the chorus sporting bright blue hair and the two ugly sisters coiffed in electric pink and lemon yellow sky-high wigs. The make-up is also very detailed – and just a little unusual.

“It’s very specialised with regards to make-up and the designer is quite specific in the details,” explains Siân as she applies thick arched brows and green eyeshadow to Bethan. “This is all set down in detailed notes - if you read the make-up notes along with some of the designs they are so specific right down to the shape and colour of eyebrows, colour of eyeshadows etc.

“We don’t normally get that much detail for make-up. For example for Don Magnifico, Angelina’s wicked step-father (not step-mother, one of the opera’s twists on the traditional tale), we have a specific design right down to describing how one eyebrow is arched higher than the other. Many of the cast and certainly the ugly sisters have these moles or beauty spots on their faces but they are diamond shaped and very specific colours. There’s also shading down one side of the face for the ugly sisters – there’s a lot of detail.” 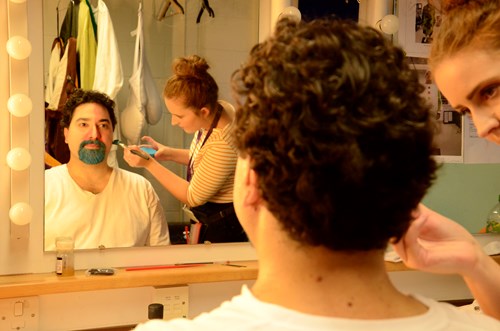 The look may be dramatic but the WNO team are not using specialist theatrical make-up, it’s high street brand MAC who have provided make-up for the company for around ten years.

“We tend to use a lot of MAC make-up,” says Siân. “They give us make-up support so we have a lot of their products and there’s something in their range which is suitable for most things we require.”

With three different productions in the season and casts of 20 or 30 plus, the team of four wig and make-up artists need to be very regimented in their approach to the performances.

“We have to schedule people with times,” says Siân. “That can be a bit difficult as you don’t want to call them in too early but then we’ve got to stagger it. So we may start about an hour and a half before the show starts.

“We tend to do the principals first, there are seven in La Cenerentola - four men and three women. It takes roughly half an hour for each person but we do need to work quickly as we don’t have the luxury of lots of time before the show starts.

“We’ll then do the entire chorus in half an hour. While we do the lead characters’ make-up we tend to do the wigs for the chorus but don’t tend to do all of their make-up. However with the chorus men there is a certain look in this show and they all have to look pretty much the same so we will help them to begin with. We provide them with everything and have photos and we’re initially there to guide them.

“It is challenging getting everyone ready in time. It’s quite a bit cast with a lot of wigs and specialised make-up and they’re getting into make-up, wig and costume in a short space of time. The first time you do it, you are playing around a little bit and seeing what works but then when you’ve done it a few times you get into a routine and you do get quicker.”

And the work doesn’t finish once the curtain rises.

“We keep an eye on everyone and monitor the make-up. When people are on stage they get warm and it can affect their make-up so we go to the dressing rooms and pop our head in and ask if they need any changes or sometimes we might even be at the side of the stage if we know there is a particular point where someone might need a bit of help.”

Siân has been making up opera singers for the Cardiff Bay based company since 1990 but when she first trained in beauty she had no idea her future would be on the stage.

“I started off doing a hairdressing apprenticeship straight from school but realised that wasn’t quite what I wanted to do,” she recalls. “I think I always wanted to do make-up and actually I wanted to go and work at the BBC because I didn’t really know about opera then, it wasn’t on my radar at all. So I did a two-year beauty therapy course because that’s all there was then which covered make-up.

“It was while I was at college that I came to WNO on work experience and that was the first I knew of opera and I absolutely loved it. Initially it was just a week of work experience but because I had hair and make-up experience I was able to come back and help out whenever I could.

“Then I joined the company. The work is always interesting - it’s never boring. You are always following a schedule from one show to another. And because the shows are changing all the time the role is also always changing. There’s always something fun going on. You work on a production and meet some great people and then you are on to the next and no two shows are the same.

“If you take just this season the shows are so different. With War and Peace we don’t have any break because most of the principals play several different characters so they are changing throughout it so we’re putting wigs on, taking wigs off, putting them on again!

“With La traviata we do get some time, it is a busy show but during the actual acts there’s not a lot for us to do so we’ll use that to prep for the following night. And then with La Cenerentola we have these really fun designs.”

With that, Siân adds the finishing touch to the now perfectly made-up Bethan. With a deft use of a handful of hairpins, Bethan is now crowned with a bright yellow wig. Actually Bethan looks more a glamorous catwalk model than an ugly sister – but I’m assured it will be another matter when Heather takes on the role of Tisbe.

“It’s all in the acting,” laughs Siân “and the facial expressions. Once Heather and Aoife have the full costumes and are on stage in character, they will be real ugly sisters!”