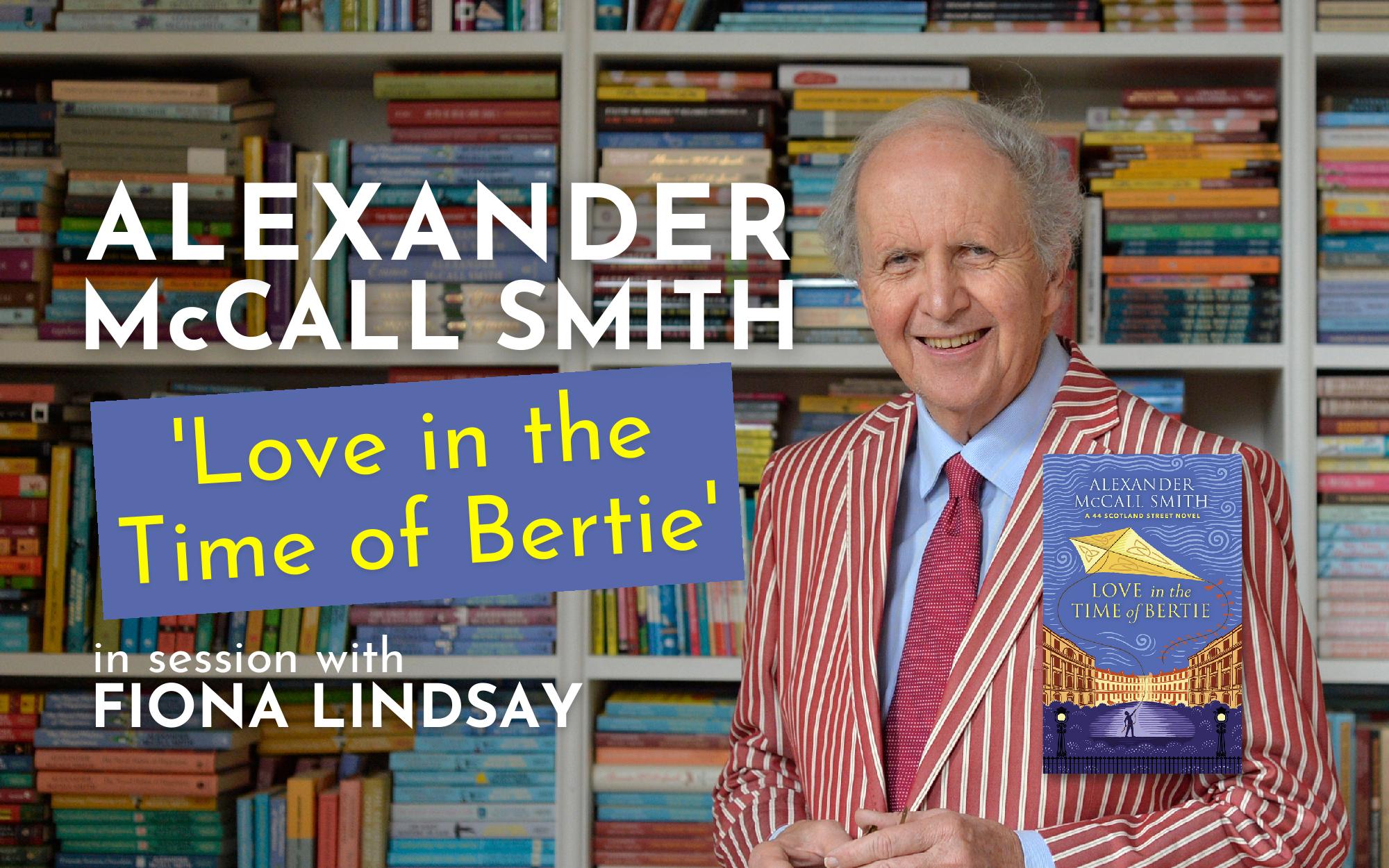 This is a streamed online event.

One of the world’s most prolific and most popular authors, Alexander McCall Smith, joins Fiona Lindsay in session to discuss the new instalment in his much-loved Scotland Street series, Love in the Time of Bertie.

Life for Bertie seems to be moving at a pace that is rather out of his control. In Drummond Place gardens it seems that Olive has their future together all planned out. Meanwhile, upstairs at 44 Scotland Street, Bertie’s father Stuart is powerless to stop over-bearing Irene and her motion for Bertie to travel to Aberdeen on a three-month secondment. And, further up in the New Town, while Bruce Anderson plots with old-school chums, love blossoms in Big Lou’s Cafe.

Intertwining their live discussion with footage shot on location in Edinburgh, Alexander invites us into his home to his study where he writes surrounded by paintings and books, he takes us to Valvona and Crolla, Scotland's oldest Delicatessen and Italian Wine Merchant which features in his books and, of course, to Scotland Street itself, the New Town street which is as full of personality as any of the characters he creates. They will delve into Alexander’s illustrious career, his warm-hearted, humorous, and wonderfully wise new novel, and what inspires him to keep writing.

Alexander McCall Smith is the author of the highly successful No. 1 Ladies’ Detective Agency series, which has sold over twenty-five million copies. Since then he has devoted his time to the writing of fiction and has seen his various series of books translated into over forty-six languages and become bestsellers throughout the world. These include the 44 Scotland Street novels, first published as a serial novel in the Scotsman, the Isabel Dalhousie novels, the Von Igelfeld series and the Corduroy Mansions novels.

Fiona Lindsay creates, curates and presents unique entertainment content for theatres, broadcast, digital and film. Recent original work for BBC Radio 4 includes Pick of the Week shows, In the Studio, The Half with Steve Davis and Craige Els, Creative Forces with Dawn French and Juliet Stevenson, Breaking Bard, Dexter and Dodd with Ken Dodd and Colin Dexter and Theatre Lives for Digital Theatre with Julie Walters, Adrian Lester, Michael Grandage, Imelda Staunton and Juliet Stevenson. She has hosted some of the country’s leading performers and entertainers in conversation events. With a specialism in theatre and entertainment Fiona works across a variety of forms and with an eclectic mix of guests. She is a talented performer, interviewer and writer who demonstrates a rare mix of charm and gentle provocation.

Approximately 2 and a half hours.

This event is being streamed as live and cannot be paused or watched again once finished. The virtual doors will open 30 minutes prior to stated start time, with the event beginning at 7.30pm. All performance times stated are in GMT. No refunds or exchanges available unless this event is cancelled.