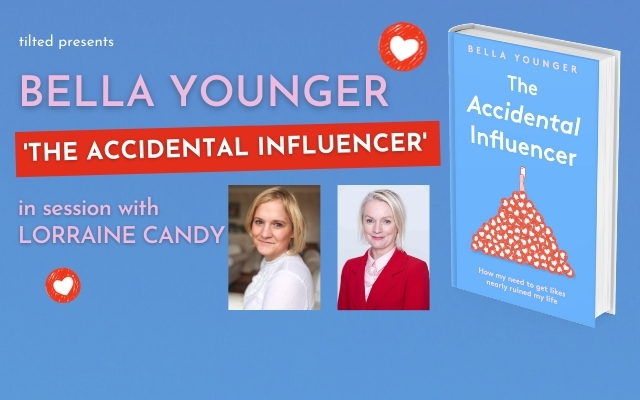 Tilted Sessions offer you an intimate peek beyond the pages with your favourite authors. Over the course of an hour or two, these sessions will offer an exclusive insight into what inspires them and their processes, and sparks imagination and creativity. Wherever you are in the world, you can join from the comfort of your home via live stream, and have the chance to get your burning questions answered live.

How my need to get likes nearly ruined my life.

When Bella Younger spawned Deliciously Stella – her hilarious and daring social media alter ego – she wanted to prove once and for all that Instagram does not equal reality. Within weeks, she’d gone viral and begun her very own #influencerlife. Shoot. Post. Repeat.

In 2016, Bella gained 75,000 followers overnight, and hundreds of likes a minute. Soon she was being paid thousands of pounds to beat up a cake for the ’gram, attend ludicrously lavish influencer gifting events and was dropping emoji-bombs left, right and centre. But even as the constant rush of notifications fuelled her endorphins, life among the Instafamous began to take a toll. As Bella’s carefree presence flourished online, her health began to spiral offline, culminating in a stint at The Priory for social media addiction. Should she have undertaken a month-long run of stand-up comedy immediately after she was discharged? Probably not, but the pressure to be ‘on’ and online was all-consuming – and she had followers to please after all…

Hosted by award-winning writer Lorraine Candy, join Bella Younger in session from her home in Mallorca for the funny, frank and fearless insight into the truth behind The Accidental Influencer.

Bella Younger is a writer, comedian, speaker and social media sensation best known as her alter ego, Deliciously Stella. Since debuting at the Edinburgh Festival in 2015, she’s been named as one of Glamour magazine’s top 8 female comedians and as one of the Evening Standard’s most influential Londoners – twice. To date, the Instagram account has spawned a spoof cookbook, a podcast with over 100,000 downloads and a sold-out live show at the Edinburgh Festival. Deliciously Stella enjoyed international acclaim, seeing Bella appear everywhere from newspaper front pages to being the top trending topic worldwide on Buzzfeed with over 1 million views. Just don’t ask her if she ‘eats clean’.

Lorraine Candy is a mother of four and an award-winning journalist with over a decade of experience writing about parenting in national newspapers and magazines, including columns with the Sunday Times Magazine and Daily Mail. She is also the co-host of the chart-topping lifestyle podcast Postcards from Midlife, which features the stories of spirited midlife women and tackles parenting adolescents. Formerly the editor-in-chief of Sunday Times Style, ELLE and Cosmopolitan, she is now focusing full-time on writing. Her book Mum, What's Wrong With you? 101 Things Only The Mothers of Teenage Girls Know is out in June 2021 (4th Estate). Lorraine is a keen open-water swimmer and dog lover and grew up in Cornwall. She can be found @lorrainecandy on Twitter and Instagram and her podcast can be found at postcardsfrommidlife.com.

Approximately 60 minutes without an interval.

There are no discounts available on this show.