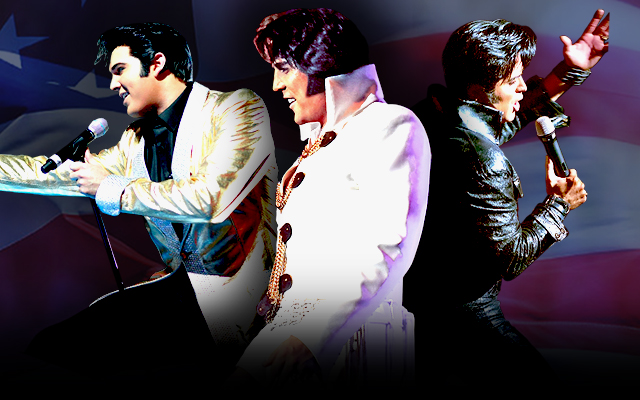 Direct from the USA, the biggest and best Elvis show in the world is back! Starring three ‘Ultimate Elvis Tribute’ World Champions including the winner of BBC’s ‘The World’s Greatest Elvis’ Shawn Klush, who jets to the UK with American compatriots - the incredible Dean Z and the sensational Cody Ray Slaughter!

All three performers have been crowned grand champions of the Ultimate Elvis Tribute Artist Contest in Memphis, Tennessee - the only contests ever to be sanctioned by Elvis Presley Enterprises themselves. Shawn Klush was the first to claim the prestigious title in the same year in which he was also crowned ‘The World’s Greatest Elvis’ live on BBC television in front of 6 million UK viewers. Following his victories, Shawn embarked on a phenomenal world tour playing to sold out arenas and major venues in all corners of the globe, raising the bar to a level never before seen in the Elvis tribute world.   In 2013, Dean Z was next in line to take the tribute world by storm as he captured the Ultimate crown with his electrifying performances. As his popularity continued to soar across the globe, Dean quickly caught the attention of the producers of The Elvis Tribute Artist World Tour and was offered a record-breaking contract to join Shawn Klush on the world’s most successful Elvis tribute show. Dean’s first appearance on the show took place at the UK’s Sheffield Arena in 2017 to rave reviews and has since built a tremendous following in the UK.

However, one other name in the Elvis tribute world stood out and appeared destined to join the Elvis Tribute Artist World Tour and in 2019, after years of negotiations, cries from the fans were finally answered when a deal was reached to add Cody Ray Slaughter to the already glittering line up. After his sensational debut tour, it was clear that jigsaw was now complete and that this incredible, all-American line up of grand champions was something truly special.

With the following tour halted due to Covid-19, the news Elvis fans have been waiting for is finally here, as the biggest, best and most successful Elvis tribute show on the planet… Is BACK!

Approximately 2 hours and 30 minutes including an interval.