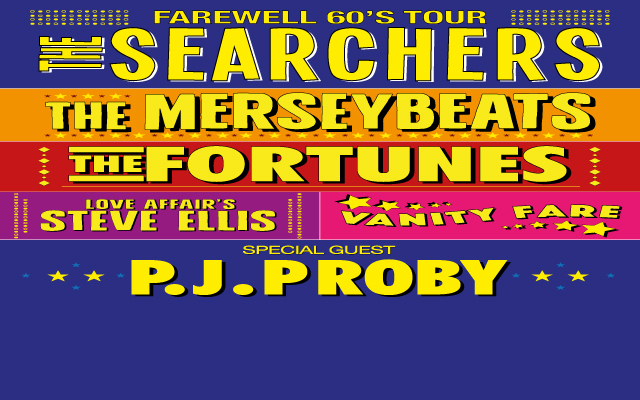 Following last years’ successful tour, Sixties Gold returns with an even stronger line-up of artists that, between them, scored over 50 UK Top 30 hits.

With a career spanning 6 decades, The Searchers now embark upon what will be their 'Farewell 60s' tour. It all began in Liverpool, where they were tipped to be as big as The Beatles, The Searchers spent 128 weeks in the charts, with sales of more than 50 million, including 3 massive UK No.1 hits.

The Merseybeats. Another success story from the Liverpool, Merseybeat boom years. Great memorable hit records including; Sorrow, I Think of You, and Wishin’ and Hopin’.

Following on in the wake of Merseybeat, The Fortunes added another dimension to the sound of the classic pop song. With hits including; 'You've Got Your Troubles' and 'Here It Comes Again', The Fortunes remain one of the UK's premier harmony groups.

This will be ponytailed P.J. Proby's final tour. His controversial trouser splitting shocked the nation and in 1964 and was the Melody Maker teen idol award winner. His hit records spent 91 weeks in the charts.

Steve Ellis, the original lead vocalist and founder of Love Affair who had five Top 20 singles, including their No. 1 Everlasting Love.

Finally, Vanity Fare, scored with three top 20 hits in the late sixties, including their catchy 'Hitchin' A Ride'.

Re-live the magic of the 1960s with six of the biggest chart acts of the decade.

Tickets will be issued 5 days before the show.

Make it an extra special night and experience VIP treatment with a Package.  Learn more...

VIP Box Packages for 4 people include the following:

Personally greeted by a dedicated host on arrival.

A private table will be reserved in one of our bars for you to enjoy pre show.

Bottle of Prosecco or *Champagne on ice at your table.

A selection of canapés served at your table and chef’s handmade chocolates.

Your host will collect and direct you to your seats for the start of the performance.

4 pre ordered ice-creams will be served to your box during the interval.

Our VIP package for 4 people is £90.00 to include VAT or £120.00 if you prefer to enjoy a bottle of *Veuve Cliquot.
For an additional £50.00 you would be invited to enjoy private hospitality in our Executive Suite pre show (subject to availability).

Please note that package price does not include your show ticket.  Bookings are required at least 48 hours before your visit.