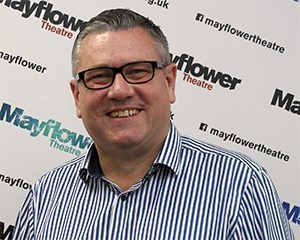 Michael has been Chief Executive of Mayflower Theatre since October 2012. He started as an actor before moving into theatre management when he became House Manager at the London Palladium. Michael has worked in UK regional theatre since 1999.

Michael is responsible for the overall strategy of the theatre but also selecting the productions that appear at Mayflower Theatre.

Michael has produced several regional shows, at Grand Opera House, Belfast he produced Richard Dormer’s award winning production of Hurricane directed by Rachel O’Riordan and A Night in November by Marie Jones. At Mayflower Theatre he produced the UK Tour of The Santa Trap and Here Be Monsters and was an Associate Producer on Titanic the Musical and Fiddler on the Roof.

Michael is on the Southampton2025 City of Culture steering group, a member of Dance Consortium and Chairs several regional cultural forums. He is an avid football fan and a regular attendee at St Mary’s.

Having started her career in the airline industry Alison loves working in theatre. She enjoys a wide range of shows and works hard at making us all embrace the finances! Away from theatre Alison enjoys time with her daughter, socialising, swimming and travelling.

Tasha’s background is event management within the leisure industry. She loves the variety, challenges and fun theatre brings! Travel, food and photography are her passions. Tasha is a keen ‘netballer’ – and captains our in-house team ‘Mayflower Tigers’.

Rachel has worked in theatre for 23 years, she trained in spatial design and her first job was in the scenic workshop at Plymouth Theatre Royal. Rachel enjoys watching live entertainment, drinking red wine eating steak and travelling the world.

Sarah has always worked in HR; insurance and paint manufacturing and now Theatre, which is the best! Her passions are horses and ballet and she feels very privileged to have seen and met her hero, Carlos Acosta.

Head of Sales and Marketing

Sarah started her career in corporate marketing, but loves working in the arts and charity. Her favourite productions are the 25th Anniversary touring production of Les Misérables and anything by Matthew Bourne. Aside from theatre, Sarah loves sailing.

Sara has had a varied career working in the Arts and participation across Theatre, Education, Health and Local Authorities. Having spent the last 7 years developing the Creative Learning work at Mayflower Theatre she is delighted to now be moving to MAST to lead the organisation’s development as a Cultural Hub for the City.

Our Board of Trustees

Paula is honoured and delighted to chair the prestigious Mayflower Theatre, having supported the theatre for a decade as a trustee and chair of the Audit and Governance committee. A Chartered Accountant and Chartered Tax Adviser, Paula’s career has spanned three decades advising leisure and retail clients across the South, culminating in a decade as partner with KPMG. For her, Mayflower Theatre is a true combination of business and pleasure and she enjoys leading a proactive and dynamic Board supporting a sector leading Executive team. Our community should be proud that, in Mayflower Theatre, Southampton boasts arguably the most successful regional theatre in the UK, with a programme that attracts a diverse audience from across the South of England.

Having been born and lived most of her life in the city, Paula is passionate about Southampton and social mobility for the youth who reside here. She sees Mayflower Theatre as being at the heart of the community and her involvement the culmination of numerous voluntary initiatives both at home and overseas. Music, choral singing and musical and operatic theatre have always played a big part in her life given her interests in singing and piano. She is married to Matthew and they have two sons who have enjoyed taking part in Mayflower Theatre's excellent youth productions.

Nick has been a Senior Partner of Paris Smith LLP Solicitors for the past 17 years and for the past 25 years, has been acting for charities advising on governance, trustees’ liabilities, fundraising, etc. Nick has been a trustee or governor of City College, Testway Housing (now Aster), Hampshire & Isle of Wight Deaf Association, Friends of St Nicolas; Assistant Governor of Rotary International; Chair of Nuffield Theatre; Chair of the Winchester Hospice Appeal; St Mary’s School; Chair of Members of Rosewood School; Governor at St Edward’s Behavioural, Emotional and Special Needs School; Prince’s Trust and of course Mayflower Theatre as a member of the Bursaries Committee, Audit and Governance Committee Chair of the Nominations Committee and is delighted to be embarking on his new role as Vice Chair of the Trust.

Nick has had a love of theatre and music from an early age. He plays the piano, the organ, conducts and sings. Nick is married to Karen and has lived in the local area for most of his life.

As a Director with many years’ experience in both Executive and Non-Executive roles within a regulatory environment, Dawn has first-hand knowledge of the responsibilities required of company boards. This includes not only technical skills in the areas of governance, audit, risk management, internal controls and strategic development, but also the interpersonal skills to objectively assess, challenge, analyse and support.

Dawn has a career spanning 25 years across the public and private sectors. In addition, Dawn’s areas of expertise include the creation of value through growth, group structure establishment and corporate structure consolidation. Dawn has also served as a board director of a specialist care provider and currently holds other executive directorships within Aster Group where she has executive responsibility for growth and assurance, as well as being a Trustee on a disability charity. Previous experience has included providing support to housing associations and local authorities focusing on: governance, organisational change, strategic partnerships, mergers and acquisitions, as well as, project management consultancy. Dawn is a member of the Chartered Management Institute, the Institute of Business Administrators and ICSA: the governance institute.

Dawn’s interest in the theatre dates back to her pre-teen years when she was an enthusiastic member of various amateur dramatic societies. She has a particular love of musicals and is a regular at Mayflower Theatre, where she hasn’t missed a festive season pantomime with her family in years.

John has served as MD and Managing Partner of international business services companies, John has enjoyed working alongside leading global firms in the Banking, Retail and Consulting sectors.

John has held key commercial roles as an advisor and non-executive director for various small to medium enterprises with interests in Europe, the USA and Asia. As a serving Southampton City Councillor since 1994, John has played a leading role in promoting the region's culture and heritage. He has served as a Mayflower Theatre Board Member since 2013, and is the Chair of the Remuneration Committee.

After an engineering apprenticeship in the aircraft industry, Colin trained as a technical illustrator and then became involved in marketing and advertising. Eventually owning his own advertising and public relations agency with maritime and governmental accounts he was involved in the public launch of the Mayflower Theatre.

Subsequently invited to join the Mayflower Theatre Trust board as a Director/Trustee he has been involved in a variety of voluntary posts including Mayflower Enterprises Ltd, Bursaries, Remunerations and Audit and Governance committees.

Shaun has been a Director of Mayflower Theatre for six years, and more recently of our “sister” theatre MAST Mayflower Studios and also the Chair of the theatre’s trading company Mayflower Enterprises Ltd. Prior to retirement, Shaun was the President of European Large Enterprises for Xerox Corporation. Now retired and living in East Dorset, Shaun spends his time motorcycling, sailing and playing golf.

Bob has been a board member for many years and takes an active interest in theatre and the arts. As well as main board activity he is also a Director of Mayflower Enterprises Limited. He is a Chartered Surveyor, now semi-retired having practiced in Southampton for more than 40 years.

Now living in Wiltshire he has recently been elected as a Town Councillor in Wilton where he involved with a number of community projects. In his spare time he enjoys live music and is a keen musician/guitarist.

Kim Romero joined the Mayflower Theatre Trust’s Board of Directors in June of 2021. Kim currently works as the Head of Growth for a local software development firm, and brings 20+ years of digital marketing and strategic sales consultancy experience to the Board.

Kim was raised in America on a steady diet of musical theatre – one of her favourite memories is seeing Michael Crawford as the Phantom of the Opera when she was a teenager – and continues to attend as many shows as possible, occasionally accompanied by one or both of her children. She has lived on the South Coast for over fourteen years and loves traveling and going for long walks in the New Forest and South Downs.

Together with Alan Whitehead former Leader of Southampton Council, now M.P. Southampton (Test), he purchased the former Gaumont from the Rank Organisation. He then set up all the initial support, management and financial systems.

He developed and managed the financial strategy for the purchase, and subsequent redevelopment and management of the theatre. Following acquisition he set up all the theatres support services and took on interim management of all the retained staff, and recruited the first cadre of new staff.

He was the City Council observer on the new MTT Board. Following his retirement from the Council in 2006 he was invited to join the Trust Board as a full Director. He has continued in that role since that time, also taking on the Chair of the Health and Safety Committee.

His detailed experience and knowledge of the history and development of the Theatre makes him uniquely qualified in serving the Theatre and its Board.